The Best Parts of Lonely

I am not quite sure how I came across this book. I believe it must have been through GoodReads. The title caught my eye, although I must admit that I thought it was going to be about strange women, not about “leftover women” (ugh, that phrase) from Victorian times. That said, I guess unmarried women were an oddity at the time, so the title works both ways really.

The book follows the fate of three sisters trying to make a life for themselves in London after their father dies. This exploration of what it was like to be an unmarried woman in Victorian Britain may sound dull, but it was actually an enlightening and entertaining read. I have to admit that I had my reservations about reading a book about this subject written by some dude, but George Gissing does a damn fine job.

The moral of the book is that it is never wise to get into a relationship with a man who is creepy enough to lurk around your street hoping to catch a glimpse of you and then dares to complain that you were outside on your own at a time that he deemed inappropriate for a young lady.

This guy is basically the 19th century equivalent of that dude that you meet at a bar, who seems to like the fact that you’re out drinking and having a good time but, once you’ve fallen prey to his charm, begins to be concerned that you drink and go out too much. Whether you’re actually living a life of excess is irrelevant here, what matters is his will to control your behaviour, to mark you as his possession and to impose his double standards on you. Oh no, it’s the second time in about a month that a late 19th century novel feels strangely relevant.

The character who gets involved with this stalking creep does it thinking that marriage will improve her life, not realising that she is simply moving from one cage (poor working conditions and limited future prospects) to another (a loveless marriage where she is subject to her husband). Although society is now more accepting of single women than before and we are better able to support ourselves without a man by our side (I write this being fully aware that modern life is geared towards having two sources of income, but you know what I mean), there is still a certain compulsion to be in a relationship, a fear of being alone or, rather, of being with oneself. Again, this reminded me of all those times we get involved with someone for the wrong reasons, of that stupid notion that being with someone is always better than being alone, of becoming involved with someone so you won’t have to face yourself. Depression, lack of self-esteem, boredom, the belief that single women are somehow damaged, seeing that all your friends are doing it, family pressure, stupid articles in magazines that have you as their target demographic, films, the alarming rate at which you see people you went to school with becoming their parents. Whatever dragged you to that person who, whenever they pop into your mind, makes you go “what the fuck was I thinking?” as you try to turn your focus to something else as soon as possible so you won’t feel depressed.

Oh dear, how much and how little we’ve learnt. 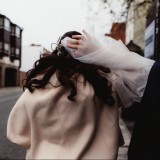 Life is what happens while you think about writing your PhD thesis. Old Millennial. Part-time adult. In a love/hate relationship with academia. I teach English and write about teenage films and emerging adulthood. Punk rock saved my life.

Emilia Pardo Bazán wrote about consent 100 years before you did

Theme by Anders Norén — Up ↑